Well, it has been a great past few days...I've just been busy doing my normal day to day routine and hanging out with friends, etc. It has just been crazy here, and I always feel like I'm in a whirlwind of everything coming together at once. So, I'm going to try and recap the best that I can, but I don't know how well I'll be able to cover everything...especially if i don't want to write a freakin' novel. 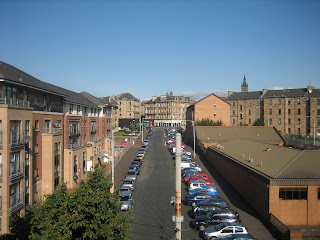 Anyways, the first big news is that it has been completely sunny here in Glasgow for the past 2 days. Right now it's a bit chilly, but not a single cloud in the sky...it's wonderful just to be able to wake up to sunshine and know I don't *cross my fingers* have to take an umbrella with me today! Here's a photo of the view from my room in my flat...

Beautiful view isn't it? :) The tall tower in the right hand side in the far background is actually my university...which is really cool to wake up too...I can also see the art museum from here, but the picture is too small to be easy for you all to make out from your computers!

So, ok, a quick recap of this weekend...which was loads of fun. Friday, I was invited with Fredrik to dinner at a girl named Cecilia's flat. It is right off of Byres Rd not 5 minutes from campus. Heloise was invited as well, so Heloise and I met Fredrik at Byres Road where we went and bought a bottle of wine along with cheese and crackers for the dinner party. It was really nice to have a chill night like that. I'm so used to them back home, that I didn't realize how much I had actually missed them (Laura's Pizza and Breadsticks for example....nom.) So it was Cecilia, Fredrik, Markus (all 3 from Sweden), a girl from Denmark (I can't remember her name! eek!--off topic names here are impossible to remember because they're so different and hard to pronouce than in the US...so it's been a bit of a challenge remembering names here..and I feel horrible about it), Heloise, Cecilia's flatmate Tessa, and little ol' me. Well, the big event of the night was when I saw Seasons 1-3 of BOSTON LEGAL sitting on the shelf of their flat..I flipped out. They were Tessa's and now we have a girl's night planned for Boston Legal here this week...I'm so excited..I miss it sooo much! (and I hate that I'm missing the last season.. :( :( ) 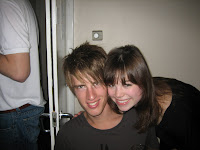 So that was Friday night, and Saturday night was Dilek (flatmate) and I's *little* get together. Little did we realize how many people would show up. It was a huge success... all international students, and we all just had some drinks (some didn't) and hung out and talked...Heloise and I got reunited with real mixed drinks and not the puny stuff they trick you with at the QMU...I definitely had ... er... enough to drink at the end of the night. The party was loads of fun, and the funniest part now, is that people have started copying our idea...Dilek got an email regarding the "next KG Street House Party" which we thought was hysterical. It wasn't even our intentions to have a real "party" but just some people over to hang out before going out to the Unions/Ashton Ln/Byres Road...but people just had a really good time I guess. We planned the party for 7:30 pm to around 11 or so...but I didn't get to sleep until 2, when I had to kick people out! Anyways, it was good fun, and everyone seemed to enjoy themselves. [and as you can see by the photo of Fredik and me...I was really...er...enjoying my drinks.. haha] 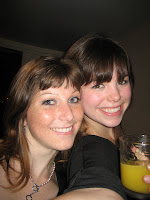 Sunday was a lazy day...didn't really do much of anything, actually...I really just needed a day of nothing in order to be ready for this week...so the day was spent being lazy at Fredrik's house, watching silly british tv with his housemates and cleaning my flat up from the night before, and then doing homework (reading).

Yesterday was the first day of classes, and I really liked it so far...Monday's are going to be really busy for me, and that should be alright..just a lot of running around. Yesterday we started with Renaissance Furniture from 10am till 1230-45 and then grabbed a quick lunch at the Heatherington Research Club (for PG's only basically...really nice place) and then hopped a taxi to the Burrell Collection to look at 16th century furniture for a couple of hours. Like I said, I think I will be just fine here at UG..the subject matter is to my liking, and I really think I'll be able to pick up on the concepts that I'm unfamiliar with easily enough. I'll do well. I want to be the best though.

After classes were over, the taxi drove us directly back to our flat (on the department's budget!) and dropped Kelly and I right off infront of my door (yay for living right next to the main street), and I came home to find my final flatmate had moved in! It's another guy from Nigeria! He seems really nice, and I think my other male flatmate is a lot more comfortable now having him around. They were talking about Nigerian food, and just all sorts of things. He's not the only guy in a house full of females now! ;)

After my giddy celebration and skipping around the flat because we're a complete family now, Fredrik showed up so we could spend some time together. Heloise called me too, and I needed to get groceries, so we went on a walking excursion to the Morrison's which is the larger grocery store near us. It is still small compared to what we're used to....around the size of Jay C's at home for all you S-burg readers. For you Btown readers...all of our grocery stores are a lot bigger...so it's a mute point.

I got ingrediants to make Indian food, so we had Josh Rogan with Beef and Rice...with Toffee cookies for dessert! haha

It feels really good to finally feel settled and with my group. Heloise and I had a great talk the other day about how lucky we are to have such a close friend so quickly and easily. She is easily my best and most trusted friend here. I love how we're getting a group too, and we're all so different and from different countries. I love talking to Dilek and Iris about Turkey and China..it's just great being able to meet so many different people. It's impossible not to grow and to learn from this experience...I can't wait to see what will happen as time goes on...it's only been a couple of weeks...but my life already feels so different...I feel a lot more independent already, and really comfortable..
...there are still weird quirks I'm dealing with though..Some asshole comment that was made to me at the beginning of this whole trip has really struck and shaken me, more so than what I've ever felt before...it was a comment about fat Americans, and it was said to my face. I mean, I know that some American's are heavier than Europeans, but it was just mean to say (cause it wasn't like he was the skinniest and most attractive person I've ever seen...ha ha ... no.) [the comment was, "so you can tell who are the american's by their big bellies."] So, it's been odd, wondering if people look at me and go, "damn she must be american..." that kinda thing...I don't know it's just weird...but at the same time..it's not like the UK/English/Scottish girls are skinny minnies...there are plenty of bigger girls here...that are not American..but I just can't shake that comment. People don't realize how easy it is to really hurt someone, and I'm irritated at myself for letting my usually titanium strong confidence get shaken by some random guy from Germany. I guess that just comes with the vulnerability of being in a new country, and being from a country that isn't on everyone's favorite list at the moment. I want to be a great example of what America is, and what we are like. I want people to meet me, and think wonderful things about where I am from, because I made a good impression on them. I'll be the first to say what America has done wrong, and is doing wrong, but I also want people to know how wonderful the country is too... I mean...we have ready made cookie dough, Pizza Express, Victoria Secret, and Sam's club... come on. ;)

Alright, I'm gonna sign off of here for now..I need to get a shower before lecture starts at 2 pm...it's an easy day for me...I might be productive after lecture and work on readings....I got stuck doing the Baroque Presentation for class on Monday..10pts for getting stuck with my least favorite time period. Thanks, Irony.

you are too cute and i'm so jealous of you. frederik (sp?) is adorable and the picture of the two of you is too cute!