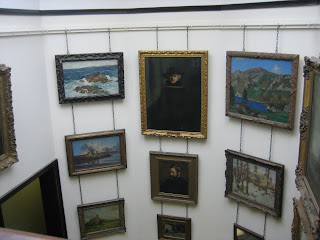 So, I'm going to continue from my other earlier blog today and finish everything that happened last night and today so far...

alrighty, where was i...right, ok...i think i might repeat myself here, so just try and keep up i guess...like i said before yesterday was the first day of my orientation process with my postgrad degree. THere are about 30 postgrads in the history of art department (taught tracks, not research), and it seems like a cool group of people...the dec arts are the severe minority..but it's totally cool. I really love my building it's in an old victorian town house, and is really cool. they have art hanging from the walls, and on top of that there is great skylighting so it makes for a really nice atmosphere! Like most postgrads, we get special treatment, so in our OWN history of art library we have a special postgrad room that has a portrait of some old guy in a kilt staring at us over the fireplace...very 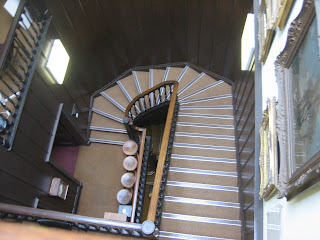 much like a harrypotter common room. But I hope he doesn't talk...that'll freak me out too much...

I also got to figure out more about the program which is incredibly nice. it's a wonderful program and i'm glad i'm here. they are very interested in catering to your specific needs, so I can do all sorts of work specially geared towards costumes and textiles...which is what i want. My second term is going to be 3 classes of my choosing and they are going to be 16th century palaces and castles, work placement and then either object based researched in the dec arts or student exhibition. The student exhibition is where a group of us PGs put together our own exhibit. Depending on what my work placement will be (we get to pick to an extent) I will probably do one or the other. I've already bascially marked my territory as the costume kid, so I'm hoping I'll be able to do what i want with out having to compete with someone who just decided that's what they're interested in. I know this might come off a little brash, but I know what I want, and I'm not sacrificing it to anyone else.

SO that was the day, and last night was loads of fun. Mark (the Candian Guy all you facebook stalkers are drooling over), Heloise, Fredrik (New friend from Sweden), and I all went to the Queen Margaret Union for a concert by The Subways (has anyone at home heard of them?) I guess they're really popular here. They were good. Definitely rock with a twinge of hardcore punk I would say..catchy songs, but a lot of screaming.? I enjoyed it well enough. We went to the balcony, which was lovely because the floor was crammed and people were moshing...ridiculous. Fun to watch from above (and safe)!

After the Subways the guys from Ministry of Sound set up and it went into hardcore club mode. It was loads of fun. Like I said about the dancing before, it's a lot different over here, but it is way fun when there are loads of people. Plus, the QMU has another more chill bar in the union, so if we wanted to sit and take a break we could... it's really cool have the clubs and such there in the union...it makes for a fun and fairly safe enviroment (aka no creepy old guys). You're just free to have fun and see friends.

Funniest part about last night, which really shouldn't be that funny, but the visual was hysterical...was this poor fresher (frosh) was way way wayyyyyy tooooooooo drunk, and he was holding onto the cast iron gates to the university (there are gates around a lot of the campus...hard to explain unless youve seen it). He was slumped over and just a flat out hot royal mess. It just made me think about what would have happened if someone was holding on to the sample gates at IU like that..I mean, they would have been arrested in a heartbeat. Not this kid...they did call an ambulence for him, but there were zero police around. Just hired security (barf duty). Honestly though, these kids must not have built up a tolerance or have a ton of money, because the drinks they serve are not on the generous side.

And after we left the club (before the drunk fresher experience) they were serving tea, coffee and cakes outside of the union...hahah sooo british!)

It's a good laugh here in Glasgow...the atmosphere is really laid back, and people seem to really be into having a good time.

it's been kinda hard to meet people from the UK though, to be honest....they kinda keep to themselves in a way? THere are loads of them in my postgrad program...so I hope i get to know them much more..I mean...i'm sure I will but you never know how cliquey it'll get.

Today was day 2 of our orientation program...and we really didn't do too much...I'm not freaking out about it anymore though, for sure, and I think I will be able to handle the work load no problem...it's just a time management issue it seems like...but you really don't spend any time in the classroom...majority of the work is independent study....so we'll see.

Alright, so that's where I'm at...right now.. I'm really tired from going out and walking everywhere in this weather...Plus I'm kinda bummed about the farm. There was quiet a bit of damage it sounds like because of the 80mph winds that came through. Just all sorts of crap for Mom and Dad to deal with that I wish they didn't have too.

My roommates and I are talking more. Right now there is Dilek from Turkey (girl), Iris from China, and a guy from Nigeria (can't say his name). There should be another male roommate moving in very soon to keep a balance. Dilek and I talked about having people over to the flat to hang out saturday night, so that should be fun! However someone keeps settting the thermostat to 30C (like 90F) and it's BOILING in here...of course I just go back and turn it down to 20 (70s ish)

I need to work on my kilos meters etc. American system wont cut it. However, I have finally managed 24 hour time! woo hoo!

messy room = par for the course.