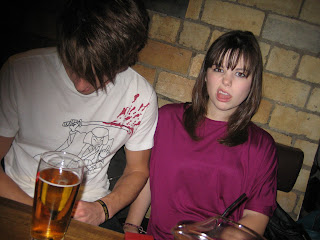 I had a wonderful weekend here in Scotland. For the most part it was pretty chill, with some adventures mixed in...

So ok, Friday was an easy day for the most part...I was in a bit of a funky mood...and I am thinking it might have been a touch of homesickness that manifested itself in a weird way. I was just in a bad mood for most of Friday and going through a very very very unusual "i'm fat, ugly, I can't believe I'm here, I'm gonna fail, the economy's gonna die, my family is gonna be broke cause we just spent all this money on my education, and other things etc etc" (ok soooo not normal, like my other half was going, "WHAT THE HELL IS WRONG WITH YOU!?!?!??!??!?!??!!" who knows...maybe i need some more sunshine (we've been getting a lot lately...though) Eventually I snapped out of it after having a study meeting with Pamela who is a Dec Arts & Collections PostGrad in my class. We did the presentation over Baroque art today and we were discussing our game plan on Friday...

So i felt a lot better after I got to talk about art for about 45 minutes....

After that I met up with Fredrik (after hitting up the grocery store for food) and we hung out and made dinner (side note: I made dinner for him 3 times last week...what the hell has happened to me? I did a good job though). we had pasta with meatballs (i just cooked the meatballs they were prepackaged and very delicious). We ate all 12 meatballs like we were starving to death, and then he left to go back to his flat to get ready to go out for the night.

So, Heloise came over and I finished getting ready, and we headed down to ashton lane (similar to kirkwood/bardstown road...but better...can't beat cobblestone roads and strictly bars and restaurants...hehe). Well, Fredrik's phone had died earlier that day, and so apparently he went on this grand a 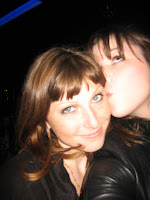 dventure looking for us at the Queen Margaret Union (where we were going later that night) and then on Aston lane. He ended up in the library looked up my mobile number on facebook, and asked a guy to borrow his phone, called me and found us. Personally, I was very impressed. He used his brain. After Fredrik found Heloise and I, we went to Vodka Wodka (has a lovely...lovely...lovely vodka selection) and we got drinks and hung out.

Then we headed over to the QMU for Cheesy Pop...it was kinda lame...which is disappointing, cause I've always heard good things about it, but there was one amazing moment...for me anyways. The DJ played Sweet Home Alabama, and for all of you Sellersburg/Borden/some Btown readers out there...this song...is like an anthem for Southerners...in my high school, this song would make everyone go nuts...and you just can't help but to love it...so of course, when i heard the first riff i went totally bonkers and was screaming and carrying on [oh god and american...blah! haha] and had a great old time dancing with the song and embarrassing Fredrik. Not too long after that we headed home...we were going to Edinburgh, and so we all wanted to make sure we got enough sleep.

So that brings us to Saturday (huzzah!) and the trip to Edinburgh. Tons of my friends were going, and we were all really excited about it, but I do have some bitching to do in regards to the planning. First off, we arrive in Edinburgh at 11 am. (left at 10 takes 1 hour to get the 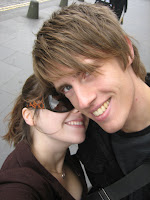 re), and then we are told that we have to be back at the bus by 4:45 pm! That was not enough time at all to do hardly anything in the city...and then after they tell us that they try and herd us all to Edinburgh Castle which is a good 15 minute walk...and a 15 minute walk with about 90 people becomes a huge hassle...especially when you're dealing with inner city traffic. So I was suffering from p 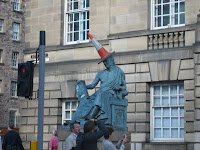 lanning irritation and hanger (hunger induced anger)....I ran into a starbucks (Heloise knows me so well now she's always pointing one out to me in case I need a fix) and I grab my tall skinny vanilla latte and a pain au chocolat (yum-o). This helps satisfy my hunger and curb my anger, but then we had to wait on Fredrik and Mark to finish at subway (why they went to subway i dunno...but whatever). So from there we hike up the royal mile to Edinburgh Castle. It was really nice and sunny, and there was a wedding going on at the cathedral, and some bagpipers playing for some coinage. (and a road cone on a statue of a philosopher's head).

So we meander our way up to Edinburgh castle, and it was crowded (per usual) and there were a bunch of asians feeding a squirrel from their hands. Absolutely disgusting. Can we say RABIES? Blah. Gross. Ok, so I had a decent laugh about that...but it grossed me out. Anyways, Mark and Fredrik decide they want to see the castle. I have already seen it a couple of years ago, and really had no desire to pay the money to see it again, and Heloise wanted to shop (always fine by me). So the boys went off to be boys and Heloise and I slowly started shop hopping throughout the royal mile. Not 20 minutes later I get a text from Mark asking us where we were....apparently it cost 12 pounds to get into see the castle...not worth it...sorry...especially when you don't have time to really go through the castle carefully.... 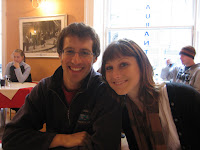 So Heloise and I complain about being hungry. Mark and Fredrik "were not hungry" and of course we gave them crap for getting subway! Anyways, since we're women and we got our way (plus I don't think Mark and Fredrik wanted both me and Heloise to have a severe case of Hanger.) So we find this little italian cafe called Rocco's and they had a pretty good lunch special. I got bruchetta and a pizza for only 6.50 quid. Fredrik who, "wasn't hungry", got the special too. Mark ordered broccoli. (haha)...and then ate half of my pizza. :) Anyways, it was a nice lunch, and from there we decided to go to the National Museum of Scotland.

So, basically that was Saturday. We got back to Glasgow, and Fredrik and I decided to just stay in for the night....Edinburgh was kinda exhausting... so for the 3rd meal I cooked him, was burritos. Which amazingly, with the difficulty of finding decent mexican food around here, turned into a great success. (they have "lightly salted" doritos aka tortilla chips...kinda tripped me out). Then we just hung out at his house the rest of the night, and I showed him and his roommates videos on youtube of Jimmy Buffet (tried to explain that when I think of God...I think of Jimmy Buffet...weird I know..), Reining (to explain what Mom does with the horses), Barrel Racing, Bull Riding, and Mutton Busting (little kids riding a sheep and holding on for dear life..)

Sunday was Heloise and Abby day in the city centre. So we went to lunch at Zizzi's (italian...delicious). We had a lovely starter of bread with goat cheese and carmalized onions, and then a pizza with smoked ham. The main waiter guy ended up giving us free shots of ameretto liquor (at 1 pm in the afternoon...wooohoo) and it was delicious. :) then we went on a hunt to find soft american style cookies (which was successful). We did some shoe shopping (I needed black flats) and then I got a new sim card with a new phone company (I text way too much and keep having to top up with my pay as you go account...so I needed to do something new. and just hung out around the city centre.

Today (monday) i had a long day.. At 9 am i had a meeting with Liz Hancock (incharge of program) to discuss a few things invovling my degree etc etc, and it went really well. From 10-12 I had lecutre/gave my presentation over Baroque art. Again, I think it went over well..but the other 5 girls in my class didn't really participate as much as I think Sally (lecturer) wanted them too..but I think she was happy with what Pamela and I presented...which is good...apparently that was worth 10% of our grade! (totally didn't have any idea)

Then we went to Durmaling (sp) castle which is an hour and a half outside of glasgow... I got to see some amazing scottish country side (oh my lordy was it beautiful) and we got to have a private tour of the castle..which was built in 1680s. What is odd is that it is still a privately owned home by a noble scottish family (with a surname of Scott...I am sure we're related..) and it was lived in until just recently. I believe the woman giving the tour was highly irritated that the current Duke chose to live in another house and not the one we were visiting. I really did feel like I was invading someone's home though..and i was irritated at them for using 17th century furniture like it just came from lazy boy. blah.

Side Note to CW readers: Totally had a portrait of 2 boys 1780s, and next to the portrait had the jackets and the guns that were seen in the portrait...I thought of Neal and Mark....and everyone else..

After the tour we took the bus home, went to the grocery, made some dinner, skyped with Fredrik, Mom, and talked to Heloise who just left.

Awesome to see you're enjoying Glasgow... If you drop down to London maybe you could give me or Howie a shout. I have a couple of suggestions for things to do in Edinburgh if you go back, too! Oh, best to ignore Ze German - that's what the rest of Europe does ;D

Thank you for the update. I love love love the group photo. :)

Did the Asians feeding the squirrels from their hands make you miss home a little??

My friends up here have been talking about taking a short trip to London sometime while we're all here...when I would have no idea since my course is going to start sucking the life out of me, but I'll definitely let you and Howie know when we're in town!!

Melinda,
you're welcome. I hope you're happy. I love the group photo as well. I had to PG that blog down and remove the photo of me violating the pre-historic scotsman to make my mother happy..but i like the group photo better anyways (it's fredriks so i stole it from him)

I've never seen asians feed squirrels at home before...so not really..did i miss like a club or something?