Packing to the Beatles

So, I've been on a major major major Beatles/John Lennon/Paul McCartney/George Harrison kick as of late. Which is totally cool with me...I just figure it is my inner hippie coming through (surprise surprise) (thank you Pandora.com)..I know that comes off as very random...but it is just that I've been listening to pandora.com (aka beatles) while I've been packing...and blogging 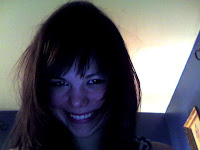 Anyways, I got my hair cut today as my big whoopee (thrilling..as always)...I'm satisfied.

The big news today was that I finally started packing...my first suitcase is filled...almost to the brim..I have to weigh it to see if I can get more stuff in it..it has almost all of my "hard" winter clothes (sweaters) in it..a lot of my jeans tops, etc...however...my closet does not look any..lighter..sheesh. I got 3 pairs of shoes in this suitcase...goodness I have no idea how I'm going to manage getting everything in all of these suitcases...this is gonna be nuts for sure...and very very tricky.

And honestly...i've been concerned about the shoe issue..but I think I will somehow manage to pack all of my shoes I'm thinking about the ones that I wear the most and I do think I'll somehow manage to get everything packed no problem...it's the big boots that are gonna be tricky. They'll be a beast to pack, but an even bigger beast to wear in the airport (too tricky to get on and off quickly). At least I know that sandals will be useless...I mean..it's glasgow..not exactly sandal weather now is it? noooope.

So this weekend, I went to Ohio to visit my grandparents one more time before I leave. It was a fantastic visit. Mom, Dad, and I went to the Piqua Heritage Festival (Pioneer RenFaire basically..very silly). Anyways, I got some fantastic antique books. One is specifically, Obstetrics: Womanly Beauty for Every Lady (1890s). It's a total trip, and very insightful. I'll post some of my favorite quotes from it on here at a later date...I've read a great deal of it...surprisingly it is a very easy read, and very entertaining (without meaning to be of course). 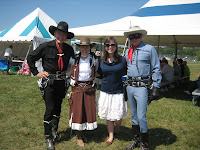 people dressed up like cowboys(girls) from the early- mid 20th century western tv shows and films. Soo guess who got her picture taken with Hopalong Cassidy, Lone Ranger, and Annie Oakley?! I totally did. Here's a picture... I can't remember if it was Hoppy or the Lone Ranger that asked me if I was married...but of course I was a bit put off by that. Older generation I guess..? I hope he wasn't being skeezy. I'll assume that black and white western hero wannabe's aren't. It'll make me feel better.


This evening mom and I put on our straw garden hats and long skirts and went and picked pinecones to make fire starters. It was good fun.. then we played in wax and made a big vanilla scented mess of things. (we used vanilla candles for wax).

So that's about it for now..I'll probably post again tomorrow with my packing update or something of that nature...maybe I'll get glasgow stuff in the mail.

OH! On a boring update, I got my AAN number (I don't remember if I posted this already or not) and now have my email address for UG and checked out my course options.