So this weekend has been a super chill one so far...Fredrik is off spelunking (UKish=potholing...) in England somewhere for the weekend, so basically this is kind of the first weekend I've spent without having Fredrik around...which just sounds incredibly bizarre to think about...on many levels.

It's weird to have people refer to him as my boyfriend, and also for me to hear the term boyfriend again, meaning my boyfriend. Fredrik and I don't really call eachother boy/girlfriend yet...mostly because even though we spend all of our time together, we haven't been together for that long, and also I guess they take the term "boyfriend/girlfriend" a lot more seriously than we do in the states? Anyways, everyone else calls us that, but we don't really call ourselves that yet...only on occasion (aka when this random girl kinda creeped on him (hardcore) asking him to go out with her that night and it was a, "no I'm with my girlfriend" because saying "the girl i'm dating exclusively but yet to call her my girlfriend because it's still too soon" is a little lengthy. :)

Anyways...I guess this is just a bit of a reflection post. It's just weird to be seriously seeing someone again..I really haven't done that since Mario and I broke up over a year ago. Going from being in such a committed relationship to being so incredibly single is a big change...and I'm surprised by how use to being single I was...I sometimes feel like I'm learning this dating/relationship thing all over again (maybe a slight cultural awareness as well? probably). Back to my point, tonight Heloise's flat (even w/ those flatmates) had a party, and of course I was invited, and of course I went. However, I now remeber why I am so greatful to have a...err..partner (?) in those situations...being a girl and not having a guy around makes you really vulnerable...and it gets irritating. I mean...with differences in cultures (aka most compared to america) getting stared at is really unnerving. Some guys just got too close for comfort, and even though I had met some of them before the party, or that some were aware that I'm not available for dating...sometimes a few of these guys just got really too close...and I was totally having "ugh I wish Fredrik was here so I didn't have to deal with this" moments.

So I left the party after only being there for a couple of hours because it was far too crowded and loud. I never do well in parties like that (i'm sure most of you know) and I just was feeling really clausterphobic and wanted to get the hell out of there. I felt bad leaving Heloise...mostly I think because I knew she wanted to leave with me as well...I don't think she was really enjoying herself either (being the only person who cares about the condition of the flat in the morning does that do ya). It was just not a party I wanted to be at for very long...plus people kept trying to get me to drink, and I just didn't want to tonight...I have a paper to write tomorrow and the last thing I want is to be hungover. Blah.

Today was domestically productive. I finally cleaned and put away all of my laundry! You can acutally see all of my floor now...which hasn't been possible really since I moved in. I even vaccuumed as well. Plus I was on such a clean kick I vaccuumed the rest of the common areas of the flat, and ironed some clothes. 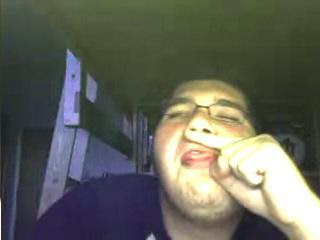 (completely off topic, my friend dan just skyped me and we're having a hilarious video conversation right now...omg. serious lols)

So I was really productive today, and I had a wonderful conversation with my flatmate Ige who is from Nigeria. We talked about all sorts of random things from dating to racism..and it was just so amazing the things that came out of his mouth...I mean it was just fascinating his perspective over things like slavery, inter-racism, and the n-word. He was really great to hang out with...plus i taught him how to cook up ground beef...which was hysterical.

yesterday was chill as well..i went to a lecture about jews in pow camps in world war 1 (was led to believe ww2...incorrect) but i fell asleep during the lecture. (oops) then I went over and met up with Heloise at Lydia (girl from germany)'s flat for dinner. I got to meet a bunch of newpeople and talk to them. Lots of people from Poland, spain, germany (always), Scotland, Ireland and America. I got drilled about America and American culture, but it was in a postive sense...a lot of them seemed really curious about what it was like in America etc etc. I went to bed after that and allowed myself to sleep in today...which was nice.

Tomorrow. 1500 word paper to write, and no room/laundry to clean and distract me, but I do believe Heloise and I are getting lunch at the Goat tomorrow (pub next to flat). They have good burgers. :)