The election, a glaswegian perspective

First off, I want to start out with this.

I am speechless. I am so overwhelmed with happiness and the strongest sense of relief I have felt in a long time. I know I am not alone in these feelings. Our country is in need of a great deal of changes, and we have already started down that road. The racism that has plagued our country for centuries has had a great wall knocked down over the past 24 hours. For as long as there is the United States of America, yesterday will be a day that will always be taught to our children and our children's children's children. We have elected a black man to be our president. Not only that, but we elected a charismatic, inspiring, uniting, motivated, and intelligent man who deserves our respect. He worked incredibly hard for this moment, and I hope he enjoys the hell out of it.

I'm fiercely liberal, and there would not have been anyway I would have voted for McCain. However, he did lose a great deal of my respect when he chose Gov. Sarah Palin to be his running mate. If he had selected a runningmate who actually knew policy, and was put together, I wouldn't have aggressively been against McCain. I honestly think she lost him the election, and I honestly believe that he would of had a great shot of being the next president if he had picked a more qualified and intelligent vp.

Palin scared me, a great deal, actually. I saw in her, a woman who would take away women's rights. I saw a woman who would make women take backward steps from where we stand today. It seems, that McCain only picked her because she was a woman. I find this incredibly insulting to all women. Even though I don't agree with Conservative politics, I know that there are more republican women out there who could have done a hell of a job as VP.

My friends from all over the world, are rejoicing with us. However, I really don't think they truely understand what this election means to me, as a young American woman. I don't have to worry about my reproductive rights being taken away. Maybe my beloved gay friends will actually be legally recognized, and no longer be discriminated against due to ignorance. What is going on in America with Prop 8 in California, etc. is un-Constitutional. I cannot tell you how much this breaks my heart. However, the Democrats are in the majority now, and hopefully, we will see equality soon.

I want my friends home from Iraq. I want to make sure that my friends who are serving my country stay in my country. I remember, distinctly, my high-school graduation, June 2004, where all of my classmates who were enlisting in the military stood up for recognition. I remember crying from the pride I had for the girl I called my best friend since I was 8 years old. However, I cannot express to you all the fear I had all through college of recieving news that she was going to Iraq. She hasn't, luckily, and I want to keep it that way. With Obama, she should stay home, and finish her education. Even though she did not go to Iraq, she has served our country for years. I want to know that when my younger brother turns 18, that he can enlist in the military, and I can go to bed and sleep soundly knowing that he wont be sent overseas at such a young age.

Even though it does not matter to me anymore, I want to know that my sibilings, family, friends, and unknown younger generations will be able to attend college, and not go into 100,000 of dollars in debt. People make "we're turning into Europe" comments, and frankly, I find it irritating. Almost all of my friends in Europe attend University for free. Many of them have served their country before attending University. My boyfriend, Fredrik, included. What is wrong with trading a couple years of your time, helping the common good of your country and your countrymen for a quality education for a more affordable rate? Also, what is really so bad about Europe anyways? Why do people talk this way? I'm sure that if these people engaged in an actual intelligent conversation with my friends (most of which study politics...go fig) from Europe, they would be surprised to what they hear.

Most people are only impressed by the fact America has incredibly cheap booze.

One more thing, before I post pictures for my aunt, I ask, that all of you conservatives out there, give Obama a fair chance. Stop watching Fox News, stop listening to Rush Limbaugh, and listen to Obama. Listen to Biden. You have had 8 years with Bush and Cheney, 1 border line stupid, and the other just plain evil (How could one deny his daughter equality is beyond me, and that is why I call him evil.) The Democrats fought hard for this election, and we were successful, truthfully (not like the election of 2000 remind you). Obama won. Give him a shot. This is our chance to show the rest of the world, that we are a forward thinking, united country. Our respect has already increased a great deal to the outside world. I know this for a fact. I no longer have to fear being discriminated against because of being American (it happens..often).

Please give Obama a chance. He deserves it. He did something that none of us could ever dream. Coming from nothing, and now he's our president elect.

Now more pictures of Scotland for my Aunt Teckla, who so polietely requested more "scotland" photos (though I don't have much) 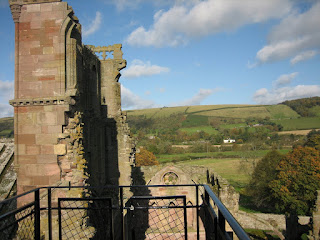 The view from the top of a tower at Melrose Abbey 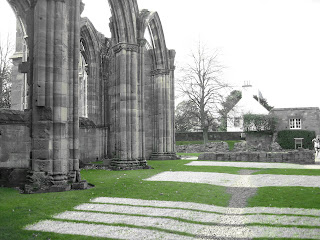 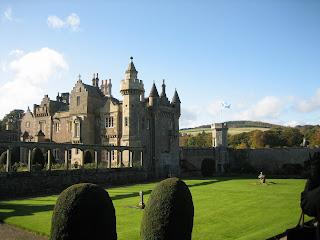 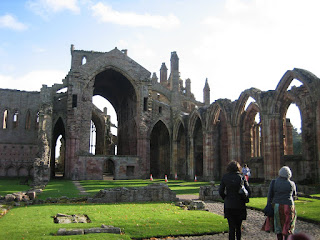 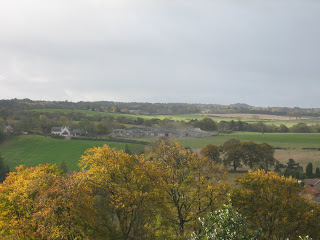 View from the scaffolding of Rosslyn Chapel..didn't post pictures of the chapel seeing as how it was covered in Scaffolding (it was kinda lame too...not gonna lie) 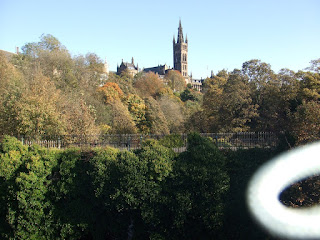 Ashley took this shot of my University from Argyle Street (?) 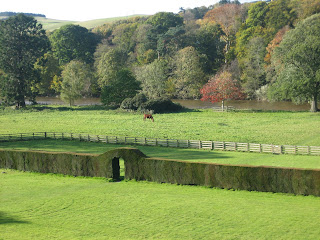 Tweed River and pasture from Abbotsford.

[I would also like to point out Obama's shout out to Native Americans in his speech last night made me cry.]