Culture Shock: A Scandinavian Student Dinner Party (aka getting drunk in heels and a dress and singing songs in languages you don't understand...) 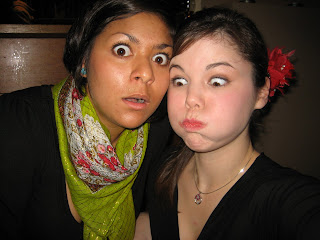 ...in melodies you recognize about penises, fat ugly women, sex, drinking, and babies.

thank you Scandinavian Student Dinner Party (SSDP from now on). It's called something specific in Swedish/Norwegian/Finnish/Danish, but I don't know all the words, so whatever. Anyways, let me explain to you all about this insane student tradition that Fredrik and Markus put together (with the help of Meri and a Norwegian girl named Eldri). The purpose of a SSDP is to get dressed up in some form. In Sweden they have these cover-alls in bright colors and you can put patches on them, sometimes they just wear these (informal SSDP), and then sometimes they go all the way up to white tie (think White House formality...even with silly Bush). Well, after much debate (Markus and Meri (?) orginially wanted to do a theme dinner, everyone else wanted an excuse to get dressed up. Including me. Duh.) So it was a semi-formal dinner. Yay for me on this one, let me tell you. I was stoked to get all dressed up and wear heels again. (off topic, I really need to live in places that are ideally located to uni/work either by close walk to subway, or close to where I work. I hate having to dress sensibly.) So I get dressed up. I wore red lipstick. I fixed my hair. I was happy. I looked damn good too if I do say so myself. :) I also made pumpkin pie for Markus because he was going to have to miss thanksgiving dinner. So I truck my tush to the Heatherington Research Club on campus.... 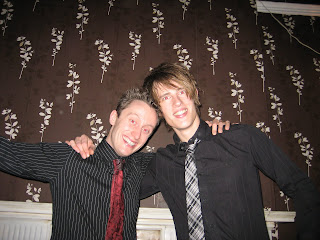 I was really impressed by what a good job Markus and Fredrik did for the dinner. A part of me thinks that no one expected it to be that nice, since it's the hrc and it's not known for fancy-pantsy, plus 2 boys running something doesn't always turn out well...even if Markus and Fredrik are like an old married couple (which they are) [I say this with the greatest love for both of those boys, who are both incredibly classy, but they're still boys.] Everyone started showing up, all dressed up. It was cool I was one of the first ones there which was nice.

Oh, before I forget, let me point something out here. I was 1 (yes 1) of 2 (yes 2) non-scandinavians there. What does this mean? Well it means I made a new friend (yay new friends!) Who's name is Angus, originally from Scotland and plays bass in the band Acutones (which opened for Westlife, and was incredibly shocked when I had a "who the hell is westlife" reaction. Clearly, I'm not up to snuff on British culture, but I think the UK needs to reevaluate their love for boybands and girlgroups (Westlife and Girls Aloud = 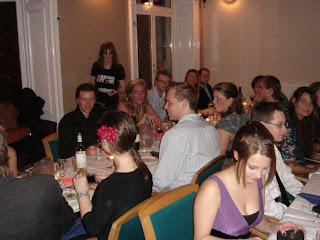 lamesauce). Super cool guy though, and it was really nice not being the only non-scandi there.

So, anyways, what do you do in a slightly awkward social situation (with a potentially annoying language barrier?), drink. And that's what I did. That's what everyone did. It was a requirement. I paid 25 quid for this fancy dinner, and i was going to enjoy the hell out of it. So we have the welcome drink and mingling while waiting for everyone to show up and dinner to get started. It was lovely hanging out with a lot of my friends (Cecilia, Agnete, Meri, so on etc).

So the dinner starts, and not within 2 minutes I was forced to sit awkwardly in my seat while I had 20-something scandi's singing about booze. It was awkward. 1 because I had no idea what was going on, and 2 i didn't know the song and 3 i couldn't pronounce the words to sing anyways..so i just sat there with this dumb gapping mouth look on my face at everyone singing their bloody brains out.

Drove me slighty bonkers. Ya'll know me, I like my food, and I don't like not being allowed to eat when it's sitting in front of me for sitting awkwardly at a table while tipsy scandis were singing.

however, apparently it's normal to eat cold food at an SSDP. So I just gave up the dream of a warm dinner. So I drank.

There is a special alcohol they serve at SSDPs similar to Schnapps. They sold it at Ikea (figures), and Fredrik and Markus bou 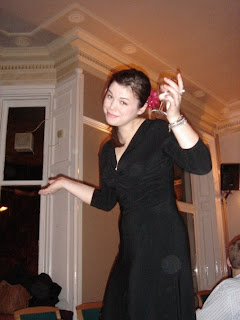 ght multiple bottles for the dinner. It's called AquaVit (life water) and it tasted like badly flavored everclear (or rubbing alcohol) and you are required to drink this stuff, in shot form. and if you fail or don't do what you're told, you get punished...which just means you get sung at and forced to finish the drink.

After the aquavit burned my throat and warmed my tummy, i got less awkward and started pretending like i knew what was going on. ha. ha. ha. silly me. but it made it a lot easier for me, and a lot more fun (cause I started singing the songs!!!)

All in all it was a fun night, and something that I know was a special experience for me. I got to experience something that was unique to Scandi culture, and I think that's really cool. It was awesome to see boys and girls not concerned about "looking cool" (like they would in America) and singing silly songs again and again. It would never have happened in America, and for that Scandi-ville gets my respect. They had fun, and I had fun with them. I just had to drink enough to start understanding Swedish, Finish, Norwegian, and ... gaelic?

Here's a vid of the birthday song (also the picture of me standing on the chair is from this song), and it's Cecilia and Meri (November birfdays), I love what Cilla does with her glass at the end (girl on the left).

Well, that was my first SSDP. Apparently, there will be one in the spring. Plenty of time for me to remember IUs fight song, and other drinking songs (other than 99 bottles of beer...)