So this post is a little later than I had intended to post, but it's been an interesting/busy/stressful weekend, and I just did not have the chance to do it. Plus I left my video camera at my flat and I wasn't there at all this weekend. 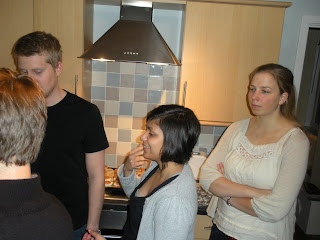 Right, onto my story.

Last Wednesday I attended a little get together organized by two friends of mine, Ida and Julia, both are from Sweden. As most of us know, it is almost Mardi Gras, and in Sweden they have a pastry that they always eat for Mardi Gras. Julia and Ida decided to make tons and invite people over to eat them. I was invited, and I was very excited about it. (um, duh, pastry?)

So I get there, Fredrik was running late, and I was lucky enough that I did not have to wait in the snow for him. As I was turning around to go waste time in a convience store (I did not know how to get to the girls' flat) I ran into Cecilla. So I walked with her to the flat, and once we get there, I was reminded of a stead fast Scandi tradition. Removal of footwear when entering a house. (No this entry does not end like that episode of Sex and the City where Carrie got a pair of Manolos at the end, though it would have been cool to get a pair of Manolo 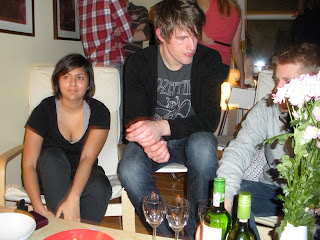 s..if anyone wants to send me a pair, I wear a 9.5 in American and a 41 in Euro. K. Thnx.). Well, it was damn cold outside that day, so I wore 2 pairs of socks, and on top of this I was wearing black jeans. Now, beign American, and not giving a damn about socks (I wore horribly mismatched socks when I was in like 4th grade...I really don't care about socks), I just had on my lovely $6 6-pack Champion Socks from Target on. I had just bought 2 bags before moving to Scotland, so they're still fairly clean. I didn't really think much of it at the time of removing shoes, but as the night wore on...I noticed something.

I was the only one in white socks. I was 1 of 2 Americans. Jose had on grey boy-ish socks, he didn't even have white socks on.

I felt like I had just committed the worst Scandinavian fashion crime EVER. I instantly became self concious and just assumed that all the Norwegian, Danish, and Swedish conversations were in regard to my sock color choices. ("Abby's great, but you can so tell she's American. LOL Look at her socks!" "Only my grandfather wears white socks! LOLOLOL!" ...you get the idea...)

So for most of the evening, post realization, I sat on my feet until I decided it was time to go. I checked out early because I had to be at Pollok House first thing in the morning.

As I was leaving I was talking to Fredrik about my observation, and he looks at me and says (a little bit like I'm an idiot, though I know he didn't mean it that way), "well it's a rule, dark pants, dark socks..."

wtf. no. You wear clean socks. no matter the color. In America, at least where I live, we leave our shoes ON, meaning, SOCK COLOR DOESN'T MATTER.

This means that from now on, next time I'm at a Scandinavian Social Gathering in a flat, I must wear only tights, or better socks.

Looks like I'll need to go sock shopping.
Anyways, here are a couple of videos from the night, and then also some pictures from the evening. It was good fun...minus the sock stuff.

That is really funny. I come from the land of no-socks (Los Angeles) so I had to buy all new socks when I got to Glasgow, and just bought some 3-packs at the Barras. It hadn't occurred to me that someone might see them...so I should probably get some nicer socks too.

Haha, the pressure of sock-wear is ridiculous! I mean, it's so true..in America we never bother about socks...it's the least important aspect to a wardrobe really..and now there's all this silly issues about sock fashions...

Checked out your blog, sounds fun with all the running, and thanks for the comment! :)

First with the eco-friendly stuff, and now with the socks. Whatever will they think of next.

And it's true, no need for socks here in San Diego. All you need is a pair of flip-flops and you're good to go for most of the year ;)

Don't worry, we scands are relaxed about socks. I doubt anyone even noticed yours,even if they were cheap white tennis-socks with holes!