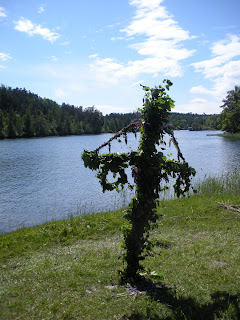 I have, very regrettably, returned to Glasvegas from Sunny Sweden.

I know, I know, I know, that I was blessed with some of the best weather Sweden has to offer, but you all need to understand, that even if Sweden isn't always like that (um can we say 25 C slight breeze and no clouds? Oh yes, I think we just did.) It is still far superior to anything I've seen from Glasgow (except that mysterious summer weather that made an appearance when I was in Paris, since I wasn't here for that, I refuse to believe it actually happened.)

I loved Sweden. LOVED IT. Sweden was exactly what I was expecting with a few surprises. The first being that Kalmar, where Fredrik is from, is like Sweden's answer to Troy, Ohio, where my mother is from, where my grandparents still live, and where I would love to live some day. Why? Because it's pretty, safe, picturesque, and not too large, but with a large city close enough to do serious shopping damage in (as we all know this is nessecary to my survival). Kalmar is beautiful and quiet and calm. It is medival with a castle, on the sea side, and the streets are covered with bicycles. Wildlife and pretty people are everywhere (mostly Fredrik, I hadn't seen him for a couple weeks, so he was looking like Adonis to me). I just really loved Kalmar...I can't really say anything other than that I guess? Plus, I got to see some of his friend's flats, and I was (and still am) playing the "This is what Abby and Fredrik's Swedish Flat will look like!" Game. It's one of my favorite games. Plus, IKEA has come out with this awesome home decorator free software...Um..totally obsessed. 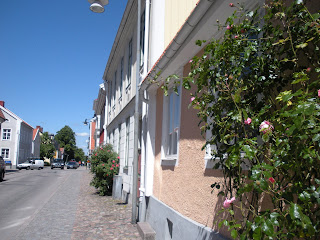 On top of Kalmar I also visited (briefly) Stockholm, Öland, and Göteburg. From what I saw of the two main cities (aka Öland is excluded from this discussion, but I will give my opinions in the next paragraph), Stockholm is prettier than Göteburg (Gothenburg). After seeing the beauty in Stockholm, Kalmar, and Öland, I was just a bit dissappointed in the industrial-ness of Gothenburg... It wasn't very picturesque...very much just...a big city. Of course, I only saw a tiny fraction of it, and very briefly...However, except for Kalmar, that was how all of my tours went. Briefly. So my brief opinion is that Stockholm is prettier.

I preferred Kalmar over all....Gothenburg has the shopping. So train rides for weekend shopping trips is perfectly doable. 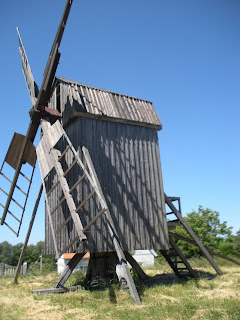 Fredrik grew up there, he is a 'real' islander. His grandmother (mother's mother) still lives there, and still owns the farm where she grew up, and where Fredrik played as a little boy. It was very cool. We paid a visit to his grandmother and helped her out around the place since her husband has passed and she lives alone. It was an interesting experience...mostly due to the fact that she is really hard of hearing, my Swedish is rubbish, and she would still mumble to me in Swedish. So it was a good time. The island is also cool, because 1. there are viking burial mounds 2. old wooden windmills are everywhere and 3. you can see the sea on either side of the island.

On top of seeing where Fredrik was from, I finally got to meet (everyone?) that has influenced Fredrik in one way or another. I was very happy to finish meeting his massive amounts of friends (and re-meeting ones I have met before). Everyone was so nice and really friendly (keeping in mind the swedish stereotype of people being standoffish, having a swedish boyfriend helps in this matter i believe...plus they're cool people anyways). Karl had a bbq and that's where I finished meeting most of the people. Mostly the girls with a couple of boys that didn't make it to Scotland in April. I had one interesting experience that I really want to write about, mostly for her, and for anyone else who has this 'fear'. One of the girls in the group was, I am assuming and was basically told, was nervous to speak to me in English. She understood everything I said, in English, but was nervous and did not like the idea of speaking English to me. Mostly, from what I've gathered, is because she was concerned about being judged on her English by a native English speaker. This is not the first time a non-native speaker has done this, and probably wont be the last. However, I wish I would have known this at the party, because I would have really made it clear that I don't judge people for speaking a second language, no matter how 'bad' it is. How can I? I have no right to do that, especially when I am not bi-lingual in any language, and am barely understanding Swedish. She was already way ahead of me in the ball game if she could understand everything I said, because I couldn't understand her. I just feel bad when people feel this way, because, it's an unnessecary fear. I honestly can't think of a single american friend of mine (or British really) that would judge someone for speaking English poorly...especially when you're in their country.

It was just a bummer, because I was looking forward to meeting her and having some sort of chat. I dont want people to be nervous in any situation..especially if it involves talking to me. It's ok though, I will just have to practice my Swedish more. Maybe the next visit we can have some sort of Swenglish conversation.

But speaking of Swedish-English conversations..I had a humerous observations in Kalmar. Fredrik, some of his friends, and his family (mother in particular) take a sharp breath in with an 'ah' sound (like you're gasping for breath kinda or shocked) as a way to say 'yes'. scared the crap out of me when I first heard his mom do it. I thought something bad had happened or was said. This wasnt the case, but it scared me nonetheless. Then I became acutely aware of it and noticed that almost everyone does it. Then, it just became funny...and really interesting, and finally, when I was in the care to Gothenburg with Fredrik, Petter, and Elin, I asked, 'what the hell is up with the breathing thing?!'. Of course, Fredrik was totally confused at first and I had to really explain it...then he looked at me like I was a bit silly, and either Petter or Elin (or both?) said it was probably just them saying 'yes'. 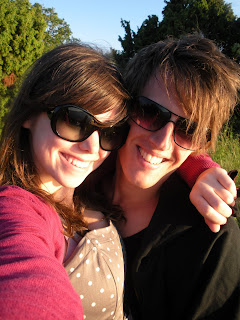 Elin and I had a really great chat when we met about visas etc. Her boyfriend is Turkish, and they had to go through the whole visa ordeal to get him into Sweden. She and I chatted about the whole process, and what it was like, and the time it took. Also, that my blog is perfect to use as a way to prove Fredrik and I's relationship (Hej Migrationsverket!) since this thing has documented our whole relationship (I even write about meeting him for the first time September.) More and more, it is looking like I will be moving to Sweden within the next year or so. This is for different reasons, but mostly Fredrik and I can't stand this seperation and I am ready to leave the UK, and I really want to move to Sweden. Glasgow has served its purpose, and I fulfilled a long dream to live here, but now, I'm ready to move on. So, more than likely (highly likely), I will be moving home sometime in the fall/winter. Either 1. to get a job and prepare for Fredrik to move to the US to do his thesis work with an American engineering company or 2. to work to save money up for when Fredrik finishes his work and has a job in Sweden, so I can move, and we can get by while I learn Swedish and find a decent job (hopefully within my field. Fredrik and I have agreed that it is really possible for me to get work as an English speaking guide for art museum/castles/etc). However, I am leaving my options open. I would not be moving to Sweden to start an amazing museum career (though it would be cool), but I would be going to be with Fredrik and to have a chance to learn from a different country, a different language, and have an adventure. As long as I have a job I enjoy and I feel good at, then I'll be happy.:) Plus, I loved Sweden, so I think I'll enjoy myself...I'll just need to buy a huge 'Happy Light' for those dark winters.

Ok.. so I took over 200 photos in Sweden, clearly that's too much for this blog, so here is my facebook album link. Enjoy. 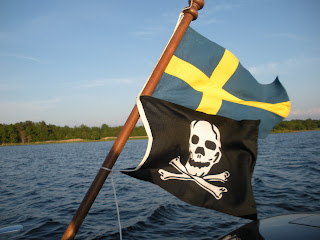 And that, my friends, is at least one Sweden post. I have other funny stories to write about, but I just dont have it in me at the moment.

Hehe your article is cute! My husband is from Sweden and I feel like you in every sense of the way. He moved to Los Angeles for me- but I sure dont mind the yearly visits there. For now periodic trips to IKEA will suffice here is LA. Obsessed just like you! : )